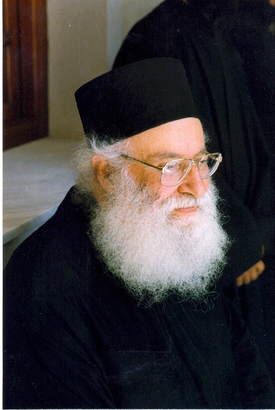 Abbot of the Monastery of Komnineiou and Saint John the Theologian in Stomion, Larisa, Greece – was one of the most distinguished and popular Orthodox speakers of the 20th century. His reason he was a dynamic and beloved preacher, always concise, meticulous; scientific yet understandable and accessible even for the most naive listeners. Indeed they can be described as theological and enlightened that nourished and nourishes spiritually hungry crowds. Thousands of faithful attended his lessons, of which approximately 4,000 were recorded. Imbued with the eternally fragrant aroma of traditional patristic Orthodoxy, these recordings have circulated throughout the world in Greek and English; they are also being translated and published in Arabic, Romanian, Bulgarian and more. The series Revelation – Orthodox Christian Lessons is consists of 104 consecutive homilies spanning several years that the Elder gave on the Book of the Revelation. Zoë Press published four of five volumes on Revelation, translated by Constantine Zalalas, in the USA (www.zoepress.us). Apart from the treasure of hundreds of speeches and let us his blessing.