Assembly of Canonical Orthodox Bishops of the United States of America 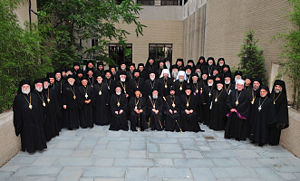 At the first meeting of the Assembly, the SCOBA members present voted to dissolve the organization and permit the Assembly to supersede it and assume all its functions, agencies and ministries. It differs from SCOBA in two significant respects: it includes all the Orthodox bishops in the region (not just the primates), and it was officially mandated by the hierachies of the mother churches (rather than being of purely local provenance).

At the first meeting of the Assembly, May 26-28, 2010, officers were elected and committees formed to work together on numerous issues of common concern to the Orthodox in the region. It was also decided to request of the mother churches that Canada be given its own Episcopal Assembly and that the bishops of Central America be allowed to join the Episcopal Assembly of South America.