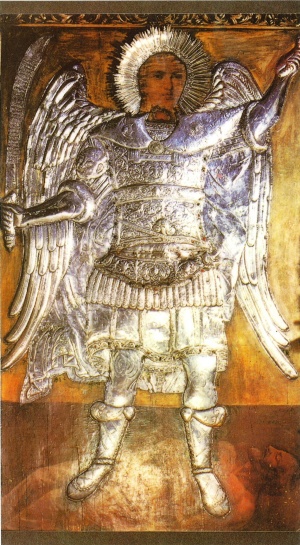 Symi island of the Dodecanese, Greece, is situated in southeast Aegean sea and northwest of Rhodes. While touring around the island you will see many churches and monasteries devoted to the Archangel Michael. The Greek Orthodox Monastery of Taxiarchis Mihail Panormitis is the most important on the island and second largest in the Dodecanese after the monastery of St John the Theologian in Patmos.

The monastery is located on the south end of Symi, situated on the seafront of the tiny village of Panormitis. It is a closed-in cove with a small sandy beach, protected by a narrow inlet that opens out into a wide harbour. The mountainous backdrop is covered with pine trees which give the area an ambiance of solitude.

The monastery is a large 18th-century Venetian-styled building with the highest baroque bell tower in the world. The facade of the main structure is white and it stretches along the coast on either side of the main gateway. In excellent condition, the Italians constructed these two rows of buildings after World War II. These buildings now contain holiday flats that can be rented by tourists visiting the monastery and also contain a bakery among other things.

Once inside the monastery main gate, visitors are welcomed by an inner courtyard decorated with exotic trees and plants and paved with 'hokhlakia'. The church dedicated to the Panormiti is on the left and inside contains the two-metre-high, silver-leafed wall icon of the Panormiti. The entire church interior is covered with iconography (of particular interest is the 'fall of the angels' mural at the back of the church) and is decorated with very elaborate chandeliers.

The exact historical date of the construction of this church remains unknown but some suggest that it was built around 450 AD over the site of an ancient temple dedicated to the pagan god Apollo. It is known for certainty that the existing church underwent a major renovation in the 18th century to bring it to the standard that is in existence today.

The monastery has two museums. One houses ecclesiastical art, and is rich in exhibits like pontificals, silver icons, Russian epitaphs, and ecclesiastical utensils, ship model offerings brought to Panormitis from far away by the sea, and one of folk art with important objects of the folk culture of the island relevant to fishing, agriculture, and shepherding. There is also a library with Byzantine manuscripts and editions of ecclesiastical, historical, and philological content, as well as a gallery with paintings of the landscape of the monastery and its two chapels. There is also a memorial to a former abbot, two monks, and two teachers, who in 1944 were executed for running a spy radio for the British commandos.

The monastery receives heaps of day-trippers from Rhodes, so if you really want to enjoy it in peace and quiet, it is best to wait until they have gone. The monastery's dorm-house can host up to 500 people. The only way to get to the monastery is via a ferry or excursion boat. If you are already on the island, there is a road that exists between the monastery and the town of Symi. This can take over six hours to walk or an hour using a local bus service or rented scooter.

In the church is the famous icon of the Archangel Michael Panormitis, who is not only considered the island's patron saint but also the guardian of sailors in the entire Dodecanese area.

One story is that this icon appeared miraculously and, on several occasions, was removed only to reappear mysteriously in this same location. The church was then built over the location, which, other sources suggest, was also a template to Apollo.

According to legend, if you ask a favour from Archangel Michael, you must promise to give something in return.

The tradition of the broom offering

The Archangel Michael is famous in the Dodecanese for his righteous nature. If you have made an offering to him and did not fulfill it, he will make it clear through various miracles that he is not pleased - until you complete your promise. One famous miracle that occurs often and to this day, is the miracle of the Archangel preventing the boats from leaving the dock. This has become such a regular occurrence that the Captains of the boat will announce over the PA to the passengers that someone on the boat has forgotten a promise to the Taxiarch. Once this promise is fulfilled, then and only then do the boat's engines work.

Message in a bottle

Other items of interest are the bottles with prayers inside. The origins of this tradition are owed to the Greek sailors, who would cast these into the sea and would end up, mysteriously, on the shoreline of the monastery.
Today, many believers still practice this tradition. If you visit the museum, these messages have been kept for anyone to read.

As a result of these traditions, the inside of the church is decorated with an array of gifts given by the devout pilgrims. There have been so many of these gifts that a lot of them can be viewed in the museum and include model ships made from gold and silver. The monastery is also filled with wonderful paintings, carvings, and icons depicting various saints.

Other churches of Archangel Michael in Symi

Other monasteries of interest include the Monastery of Sotiros and of Stavros Polemou which are on the west coast of the island. Most of the churches on this island are dedicated to the Archangel Michael.

Hail, Michael, great chief commander, with all the hosts of heaven!