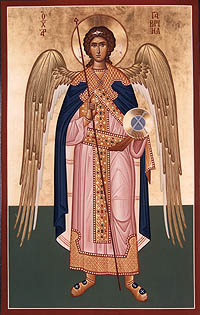 However, Gabriel is usually portrayed with certain distinguishing characteristics. He typically wears blue or white garments; he holds either a lily (representing the Theotokos), a trumpet, a shining lantern, a branch from Paradise presented to him by the Theotokos, or a spear in his right hand and often a mirror—made of jasper and with a Χ (the first letter of Christ (Χ