The first Orthodox bishop consecrated in North America, St. Raphael Hawaweeny, was consecrated by the Russian Orthodox Church in America to care for the Orthodox Arab faithful in the USA and Canada. Through his efforts, what is known today as the Antiochian Archdiocese came into being. His initial arrival in America was not to serve in the episcopacy, however, but he came as an archimandrite in 1895 at the request of members of the Syrian Orthodox Benevolent Society, an ostensibly philanthropic group whose primary purpose was to maintain ties between Orthodox Arabs living in America. He thus came to the US and was canonically received under the omophorion of Bishop Nicholas (Ziorov) of the Aleutians, the Church of Russia's exarch in America at the time.

Upon arriving in New York, Fr. Raphael established a parish in lower Manhattan, then the center of the Syrian immigrant community. By 1900, however some 3,000 of these immigrants had moved across the East River, shifting the center of their life to Brooklyn. Thus, in 1902, the parish purchased a larger church building in that borough on Pacific Street. The church was named for St. Nicholas the Wonderworker, renovated for Orthodox worship, and then consecrated on October 27, 1902, by St. Tikhon of Moscow. St. Nicholas Cathedral was later relocated to State Street in Brooklyn and is today considered the mother cathedral of the Archdiocese.

At the request of St. Tikhon, Fr. Raphael was chosen as his auxiliary bishop, consecrated at St. Nicholas Cathedral as Bishop of Brooklyn and given more authority for his care of Arabic Orthodox Christians in America. Not long after, he founded Al-Kalimat (The Word) magazine, published service books in Arabic which were used in America, the Middle East, and throughout the Arabic Orthodox diaspora. St. Raphael fell asleep in the Lord at the age of 54 on February 17, 1915, after short, but fruitful, years of service.

However, after the Bolshevik Revolution threw the Russian Orthodox Church and its faithful abroad into chaos, the Orthodox Arab faithful in North America, simultaneously shaken by the death of their beloved bishop St. Raphael, chose to come under the direct care of the Patriarchate of Antioch. Due to internal conflicts, however, the Antiochian Orthodox faithful in North America were divided between two archdioceses, those of New York and Toledo, generally representing those who were loyal to the Church of Antioch and the Church of Russia, respectively. This division of the Arabic faithful resulted significantly from the division in loyalty to the bishops who aligned themselves at the time with the Russian Metropolia, those who were involved with the formation of the now-defunct American Orthodox Catholic Church, and those who chose to have canonical recourse directly to the Holy Synod of Antioch.

With the signing of the Articles of Reunification by Metropolitan Philip (Saliba) and Metropolitan Michael (Shaheen) in 1975, the two Antiochian Orthodox archdioceses were united as one Archdiocese of North America (now with its headquarters in Englewood, New Jersey). Metropolitan Philip became the primate of the newly reunified archdiocese, and Metropolitan Michael became an auxiliary archbishop. Since then the Archdiocese has experienced rapid and significant growth through the conversion of a number of Evangelical Protestants—both individually and as congregations, especially with the reception of the majority of the Evangelical Orthodox Church in the 1980s—and also through ongoing evangelization and the immigration of Orthodox Arabs from the Middle East. 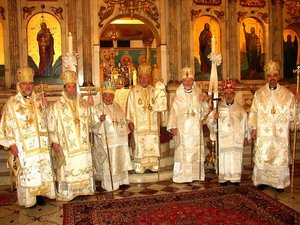