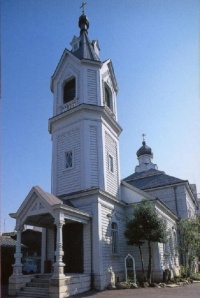 Annunciation Cathedral developed from the efforts of early missionaries sent by Bishop Nicholas (Kasatkin}, the Apostle to Japan, during the latter decades of the nineteenth century. The initial missionary in the Kyoto district was Pavel Nakakouji, a catechist who visited the city in 1880. By 1889, a meeting hall was acquired in the central district of the city and a full time catechist, Kiril Sasaba (Masakichi), was assigned to the mission under the supervision of Father John Ono (Shogoro), the priest in the neighboring city of Osaka.