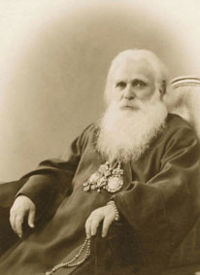 In 1908, Archim. Ambrose was accused of conspiring in the murder of the Exarch of Georgia, Abp. Nikon (Sofiisky) and was deprived of the right to serve in the Church. This time, he was exiled to the Holy Trinity Monastery in Ryazan where for a year he was held under strict guard until he was acquitted and reinstated with his rights. But, he was still kept in Russia.