All-Merciful Saviour Monastery is a monastic community of the Russian Orthodox Church Outside Russia, under the omophorion of Archbishop Kyrill. It is the only male Orthodox monastery in Washington state. It was established in 1986 by Archimandrite Dmitri of Santa Rosa, California, and in 1988, under the leadership of the Very Rev. Igumen Tryphon, moved to Vashon Island, Washington.

In 1992, islanders Georgia and John Ratzenberger ("Cliff" from the US television series "Cheers") donated five acres of land to the monastery. In 1999, to protect the solitude of the monastery, the brotherhood purchased an adjacent eleven acres of land to save it from development. Along with an adjacent, publicly-owned 40 acre watershed, the monastery is quietly secluded in the forests of Maury Island.

The monastery occupies sixteen acres of secluded forest on the southeast end of Vashon Island, just south of the village of Dockton.

The monastery presently includes a main temple dedicated to the Protection of the Holy Virgin, a small chapel dedicated to Saint John the Wonderworker of Shanghai and San Francisco (the monastery's patron saint), a large trapeza, a library and community room, a bookstore and office building, and seven monastic cabins (cells).

The monks have two large vegetable gardens, producing heirloom organic vegetables, berries and four varieties of wine grape vines. There is also a small orchard of apple and fig trees. Free-range chickens provide the community with fresh eggs. The monks are committed to living as good steward of the land, with strong emphasis on sustainability (an Orthodox monastic tradition).

The holy brotherhood supports itself by producing a line of gourmet coffees, under the brand name, Monastery Blend Coffee, which can be ordered through the brotherhood's website: http://www.vashonmonks.com 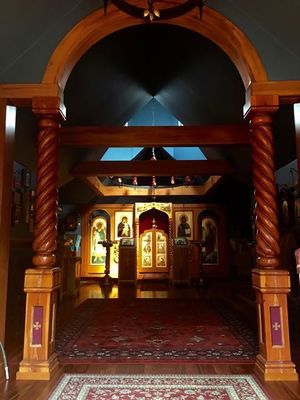