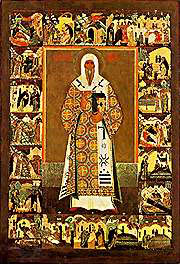 St Alexis, Metropolitan of Moscow and Wonderworker of All Russia

Our father among saints Alexis ( or Alexius, Алексий in Russian) (1296? – 1378) was a Metropolitan of Moscow (Kiev) and all Russia (beginning in 1354) who presided over Muscovite government during Dmitrii Donskoi's minority. He is remembered by the Church on February 12.

Alexius, whose birth name was Eleutherius, was the son of Fyodor (Theodore) Biakont, a boyar from Chernigov who settled in Moscow and founded the great Pleshcheev boyar family.

The Lord revealed to the future saint his lofty destiny in early childhood. At twelve years of age Eleutherius went to a field and set nets to ensnare birds. He dozed off, and suddenly he heard a voice: "Alexis! Why do you toil in vain? You are to be a catcher of people."

He took monastic vows at the Epiphany Monastery of Moscow around 1313. The renowned ascetics of the monastery, the Elders Gerontius and St Stephen (July 14), brother of St Sergius of Radonezh, were guides for him and his companions.

Around 1333, he moved to the residence of Metropolitan Theognostus. The metropolitan, who had taken notice of the virtuous life and spiritual gifts of St Alexis, asked the future saint to leave the monastery and manage the ecclesiastical courts. The saint filled this office for twelve years.

In 1340, Alexis was appointed metropolitan's deputy in Vladimir, and twelve years later he would become the bishop of Vladimir.

By the will of Semeon of Russia (Symeon the Proud), Alexis was appointed adviser to his brothers, Ivan II and Andrew. After visiting Constantinople, he was chosen to become the Metropolitan of Kiev and all Russia in 1354. When Dmitrii Donskoi and Vladimir the Bold were young, Alexius was their spiritual tutor and a regent at the same time. He took the side of Dmitrii Donskoi in his struggle against Tver and Nizhny Novgorod, because of which he once sent St. Sergius of Radonezh to suspend divine services in churches and monasteries until the political strife was over.

In 1360s, Alexis founded the Andronikov, Chudov, and Alekseyevsky monasteries. He promoted Metropolitan Peter's canonization by the Russian Orthodox Church. Shortly before his death, Alexis fruitlessly tried to convince Sergius of Radonezh to become his successor.

St Alexis reached the advanced age of seventy-eight, having spent twenty-four years in the metropolitan's cathedra. He reposed on February 12, 1378, and was buried in accord with his last wishes at the Chudov monastery. His relics were uncovered in a miraculous manner fifty years later, after which the memory of the great holy hierarch and man of prayer began to be celebrated.

Alexis was also an author of sermons and epistles. He was canonized by the Russian Orthodox Church in 1448 and has been revered as one of the patron saints of Moscow. His relics were venerated in the Chudov Monastery that he had founded. The monastery was closed by the Communists in 1918, and it was demolished in 1929. St Alexis' relics can now be found at the Epiphany Cathedral. (see http://www.st-catherine.ru/index.php?lang=eng&sitepartid=9&id=1766&level=0&PHPSESSID=679b655c50f95ad3c0975f29046edc58)

St Alexis is also commemorated on May 20 (uncovering of his relics) and on October 5.

The fervent protector of apostolic dogmas,
The pastor and teacher of the Russian Church:
By celebrating the memory of the blessed bishop Alexis
We glorify with our songs Christ our God.
He has given us a faithful worker
And a fountain of healing grace,
The praise and confirmation of Orthodox Christians!

Help with box
Retrieved from "https://orthodoxwiki.org/index.php?title=Alexis_of_Moscow&oldid=111870"