Difference between revisions of "Alexander of Svir" 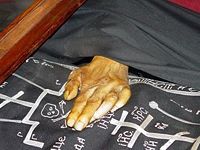 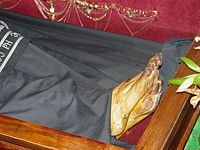 The most honourable father in the Lord, Saint Alexander of Svir was born July 15, 1448]] and died Agusut 30, 1553, at 85 years of age. In 1998, the incorrupt relics of St. Alexander were discovered and they are now located in the reopened Svir Monastery. He is commemorated by the church August 30.

Saint Alexander of Svir was born on July 15, 1448, on the feastday of the Prophet Amos, and was named for him in Baptism. He was a beacon of monasticism in the deep forests of the Russian North, living in asceticism, and he was granted the extraordinary gifts of the Holy Spirit. His parents, Stephen and Vassa (Vasilisa) were peasants of the near Lake Ladoga village of Mandera near Lake Ladoga, at the bank of the River Oyata, a tributary of the River Svira. They had sons and daughters who were already grown and lived away from their parents. Stephen and Vassa wanted to have another son. They prayed fervently and heard a voice from above: "Rejoice, good man and wife, you shall bear a son, in whose birth God will give comfort to His Church."

Amos grew up to be a special child. He was always obedient and gentle, he shunned games, jokes and foul talk, he wore poor clothes and so weakened himself with fasting, that it caused his mother anxiety. Upon coming of age, he once met some Valaam monks who had come to the Oyata to purchase necessities, and for other monastery business.

By this time Valaam was already known as a monastery of deep piety and strict ascetic life. After speaking with the monks, the young man was fascinated by their account of the skete life (with two or three monks together) and the solitary life of the hermit. Knowing that his parents had arranged a marriage for him, the youth went secretly to Valaam when he was nineteen. In the guise of a traveler, an angel of God appeared to him, showing him the way to the island.

Amos lived for seven years at the monastery as a novice, leading an austere life. He spent his days at work, and his nights in vigilance and prayer. Sometimes he prayed in the forest bare-chested, all covered by mosquitoes and gnats, to the morning song of the birds.

In the year 1474, Amos received monastic tonsure with the name Alexander. After several years, his parents eventually learned from Karelians arriving in Mandera where their son had gone. Following the example of their son, the parents also went to the monastery and were tonsured with the names Sergius and Barbara. After their death, St Alexander, with the blessing of the igumen of the monastery, settled on a solitary island, where he built a cell in the crevice of a cliff and continued his spiritual exploits.

The fame of his asceticism spread far. Then in 1485 St Alexander departed from Valaam and, upon a command from above, chose a place in the forest on the shore of a beautiful lake, which was afterwards named Holy. Here the monk built himself a hut and dwelt in solitude for seven years, eating only what he gathered in the forest (Later at this place, Holy Lake, 36 versts from the future city of Olonets and 6 versts from the River Svira, St Alexander founded the monastery of the Life-Creating Trinity, and 130 sazhen (i.e. 910 feet) off from it, at Lake Roschina, he built himself a hut on the future site of the St Alexander of Svir monastery).

During this time the saint experienced fierce sufferings from hunger, frost, sickness and demonic temptations. But the Lord continually sustained the spiritual and bodily strength of the righteous one. Once when suffering with terrible infirmities, he not only was unable to get up from the ground, but was unable to even lift his head. He just lay there and sang Psalms. Then a glorious man appeared to him. Placing his hand on the sore spot, he made the Sign of the Cross over the saint and healed him.

In 1493 while hunting for deer, the adjoining land-owner Andrew Zavalishin happened to come upon the saint's hut. Andrew spoke to him of a light he had seen at this place, and he entreated the monk to tell him about his life. From that point Andrew started to visit St Alexander often, and finally through the monk's guidance, he went to Valaam, where he was tonsured with the name Adrian. Later, he founded the Ondrusov monastery, and led a saintly life (August 26 and May 17).

Andrew Zavalishin was not able to keep silent about the ascetic, in spite of the promise he had given. News of the righteous one began to spread widely, and monks started to gather around him. Therefore, St Alexander withdrew from the brethren and built himself a dwelling place 130 sazhen from the monastery. There he encountered a multitude of temptations. The demons took on beastly shapes, they hissed like snakes, urging him to flee. However, the saint's prayer scorched and dispersed the devils like a fiery flame.

In 1508, twenty-three years after he came to this secluded spot, the Life-Creating Trinity appeared to St Alexander. One night he was praying in his hut. Suddenly, an intense light shone, and the monk saw Three Men, robed in radiant white garb, approaching him. Radiant with heavenly Glory, They shone in a pure brightness greater than the sun. Each of Them held a staff in His hand.

The monk fell down in terror, and coming to his senses, prostrated himself on the ground. Taking him up by the hand, the Men said: "Have trust, blessed one, and fear not." The saint was ordered to build a church and a monastery. He fell to his knees, protesting his own unworthiness, but the Lord raised him up and ordered him to fulfill the commands. St Alexander asked in whose name the church ought to be dedicated. The Lord said: "Beloved, as you see Those speaking with you in Three Persons, so also construct the church in the Name of the Father and the Son and the Holy Spirit, the Trinity One-in-Essence. I leave you peace and My peace I give you." And immediately St Alexander beheld the Lord with out-stretched wings, going as though along the ground, and He became invisible.

The apparition of the Holy Trinity

In the history of the Russian Orthodox Church this appearance is acknowledged as unique. After this vision the monk began to think where to build the church. Once, while praying to God, he heard a voice from above. Gazing up to the heavens, he saw an angel of God in mantiya and klobuk, such as St Pachomius (May 15) had seen.

The angel, standing in the air with outstretched wings and upraised hands, proclaimed: "One is Holy, One is the Lord Jesus Christ, to the Glory of God the Father. Amen." Then he turned to St Alexander saying, "Build on this spot the church in the Name of the Lord Who has appeared to you in Three Persons, Father and Son and Holy Spirit, the Undivided Trinity." After making the Sign of the Cross over the place three times, the angel became invisible.

In that same year a wooden church of the Life-Creating Trinity was built (in 1526 a stone church was built here). And at the same time as the building of the church, the brethren began to urge St Alexander to accept the priesthood. For a long time he refused, considering himself unworthy. Then the brethren began to implore St Serapion, Archbishop of Novgorod (March 16), to convince him to accept the office. And so in that very year St Alexander journeyed to Novgorod and received ordination from the holy archbishop. Soon afterwards, the brethren also asked the saint to be their igumen.

As igumen, the monk became even more humble than before. His clothes were all in tatters, and he slept on the bare ground. He himself prepared food, kneaded dough and baked bread. One time there was not enough firewood and the steward asked the igumen to send any idle monks for firewood. "I am idle," said the saint, and he began to chop firewood. Another time, he carried water.

When all were asleep, the saint was often busy grinding wheat with hand-stones to make more bread. At night he made the round of the cells, and if he heard vain conversations, he lightly tapped on the door and departed, but in the morning he admonished the brother, imposing a penance on him.

Towards the end of his life, St Alexander decided to build a stone church of the Protection of the Most Holy Theotokos. One evening, after singing an Akathist to the Most Holy Theotokos, he settled down to rest in the cell and suddenly said to his cell-attendant Athanasius, "Child, be sober and alert, because at this hour we will have a wondrous and astounding visit."

Then came a voice like thunder, "Behold the Lord and His Mother are coming." The monk hastened to the entrance to the cell, and a great light illumined it, shining over all the monastery brighter than the rays of the sun. The saint beheld the All-Pure Mother of God over the foundation of the Protection church sitting at the site of the altar, like an empress upon a throne. She held the Infant Christ in Her arms, and a multitude of angels stood before Her shining with indescribable brightness.

He fell down, unable to bear the great light. The Mother of God said, "Arise, chosen one of My Son and God. I have come here to visit you, My dear one, and to look upon the foundation of My church. I have made entreaty for your disciples and monastery. From this time on there will be an abundance; not only during your life, but also after your death. Everything your monastery requires will be granted in abundance. Behold and watch carefully how many monks are gathered into your flock. You must guide them on the way of salvation in the Name of the Holy Trinity."

The saint arose and saw a multitude of monks. Again the Mother of God said: "My dear one, if someone carries even one brick for the building of My church, in the Name of Jesus Christ, My Son and God, his treasure will not perish." Then She became invisible.