Difference between revisions of "Alexander Schmorell" 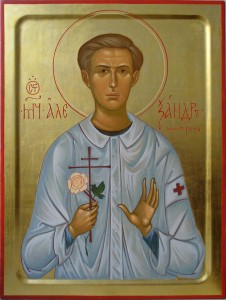 The Holy Martyr Alexander Schmorell (now also Alexander of Munich) was a medical student during World War II and one of the founding members of the anti-Nazi group, the White Rose. Along with the other members of the White Rose, he tried to rally popular support amongst Germans to try to resist Hitler and the Nazi regime. He was arrested in February 1943, and was executed on July 13, 1943, at Stadelheim Prison in Munich. On 5 February 2012, he was glorified at the Church of the Holy New-Martyrs and Confessors of Russia in Munich, Germany. He is commemorated by the Church on July 13.

Alexander Schmorell was born in Orenburg, Russia, on September 16, 1917 (September 3 on the Julian Calendar), and was baptised in the Russian Orthodox Church. His father, Hugo Schmorell, a doctor, was German, although he had been born in Russia, and had lived there most of his life, except for a time when he studied medicine in Germany. His mother, Nataliya Vvedenskaya, was Russian, and was the daughter of a Russian Orthodox priest. When Alexander was around a year old, his mother died of typhus. His father remarried in 1920. The woman whom he married, Elisabeth Hoffman, was also German, but, like Hugo Schmorell, she had grown up in Russia.

Hugo Schmorell and his family left Russia in 1921 in order to flee the Bolsheviks. With them came Feodosiya Lapschina, Alexander's nanny, under the pretense that she was the widow of Hugo Schmorell's brother. (For this reason, she was buried with the name Franziska Schmorell.) The family settled in Munich, and soon afterward two children, Erich and Natascha, were borne of this union.

Although the family was now in Germany, the language of the house remained Russian. In fact, even with the many years she stayed in Germany, Feodosiya Lapschina never learned very much German. Elisabeth Schmorell was Roman Catholic, as were Alexander's siblings, but in large part due to Feodosiya Lapschina's influence, Alexander remained Orthodox, and his stepmother made it possible for him to attend Orthodox religion classes in Munich.

In the Nazi mindset, the Slavs belonged to the great horde of untermenschen, that is, people who supposedly were barely human. This was a mindset that Alexander could never accept. At one point, he had been part of the Scharnhorst Youth, but once they became part of the Hitler Youth (Hitler Jugend), he eventually stopped attending.

When he was to be sworn in to military service, he nearly had a breakdown, and told his commanding officer that he could not do it; he could not swear absolute loyalty to Adolf Hitler. He asked to be released from military duty. He was not released, yet amazingly, there were also no repercussions for his refusal to take the oath. Before getting involved with the White Rose, he served in Czechoslovakia and in France. He began his university study in Hamburg in 1939, but by the fall of 1940 he was studying closer to home at Ludwig-Maximilian-Universität in Munich. It is around this time that he met Hans Scholl, with whom Alexander would found the White Rose.

By 1942, Nazi control of Germany was nearly total. World War II was raging around Germany on all sides. German forces had taken over most of Europe, and German troops were far into Russia and as far as the north of Africa. By this time Hitler's plans for the "cleansing" of Europe were well underway, and Nazi death camps were up and running. It was no secret that any perceived enemy of Hitler's was also liable to be arrested and sent to one of these prisons. Not only that, but the practice of Sippenhaft was also widespread, that is, the family and friends of anyone suspected of opposing Hitler would also be arrested.

The events surrounding White Rose were one of the few contexts in German history during the Third Reich where people took the chance to speak out against what Hitler was doing. In the summer of 1942, Hans Scholl and Alexander Schmorell obtained a duplicating machine and composed four leaflets under the name The White Rose which called on Germany's people to rise up and resist Hitler. The distribution of these four leaflets was fairly limited and was centered around Munich. This was not the first time that leaflets had been distributed in Germany—for example, some of the homilies of Bishop Clements von Galen which had denounced Hitler's euthanasia program had been written down, typed out, and sent around Germany anonymously. However, the leaflets of the White Rose went further, calling for Germans to realise what was happening, and to resist by any means possible. Contained in the second leaflet, in a passage written by Alexander Schmorell, is the only known public outcry by any German resistance group against the Holocaust.

During the summer of 1942, Hans Scholl, Alexander Schmorell, and Willi Graf were sent to Russia as medics. For Alexander, it was a homecoming of sorts—this was the first time in his life that he could remember experiencing Russia for himself. He told others that there was no way that he could shoot at a Russian, though he said he couldn't kill Germans either. In Russia, he provided a link for his friends to the Russian people. He sought contact with regular people, doctors, and Orthodox priests; he, Hans, and Willi attended Orthodox liturgies together (wearing Nazi uniforms, no less!).

When they returned to Munich in October of 1942, the activities of the White Rose were redoubled. This time, more people were directly involved, including Sophie Scholl (Hans' sister), Professor Kurt Huber, and Traute Lafrenz. Through Alexander's friend, Lilo Ramdohr, contact was established with Falk Harnack, younger brother of Arvid Harnack, who had been arrested in connection with the Red Orchestra (and was also associated with the Bonhoeffers).

In January of 1943, the publication of the fifth leaflet was ready. This time, the members of the White Rose risked their lives to distribute the thousands of leaflets all over greater Germany. Alexander's journey brought him to Linz, Vienna, and Salzburg.

The end of the White Rose

After the fall of Stalingrad, a sixth leaflet was produced. On February 18, 1943, Hans and Sophie Scholl were caught distributing this leaflet at the University in Munich. They were arrested, and a search commenced for Alexander Schmorell. With the help of Lilo Ramdohr and Nikolai Hamazaspian, he tried escaping to Switzerland with a forged passport, but the way was too difficult, and he turned back to Munich. On February 24, 1943, he was arrested when a friend of his recognised him in an air-raid shelter. He was sentenced to death on April 19, 1943, and was executed by guillotine on July 13, 1943.

Religion in the White Rose

Although the White Rose was not a religious group per se, it is undeniable that the faith in God that these young people had was one of the primary reasons that they acted with the bravery they did. Alexander Schmorell was the only one of the group who was Orthodox, but the faith they all showed to do what they did is exemplary. Although Alexander's connection to Orthodoxy has, in various books, been played off as merely a way for him to stay more connected with his Russian heritage, or a fascination with ritual rather than with real faith, he attended Orthodox services regularly, and as his friend Lilo Ramdohr said he was somebody who always had a Bible with him and demonstrated a lifelong love of Orthodoxy. In his letters to his family from prison, he writes about the deepening of his faith, that although he is condemned to die, he is at peace, knowing he served the truth. In his last letter, written just before his execution, he wrote his family, "Never forget God!!"

By providence, at this time, the ROCOR in Munich was searching for a church building. They were able to purchase the American church, and in this way, Alexander Schmorell's home parish is now across the street from where his earthly remains are buried. In anticipation of eventual glorification as a saint he was included on the iconostasis - sans nimbus - among the New Martyrs of Russia when the icons on the iconostasis were written in the mid 1990s.

Completing the act of canonization, St. Alexander was glorified as a New Martyr by the Russian Orthodox Church Outside Russia. in Munich, Germany on February 5, 2012.[1]

Today a light adorns our glorious city,
having within it your holy relics, O Holy Martyr Alexander;
for which sake pray to Christ God,
that He deliver us from all tribulations,
for gathered together in love we celebrate your radiant memory,
imitating your bravery,
standing against the godless powers and enemies.

From your mother you did inherit the love of Christ,
and through the love of your care-giver you were nourished in the fear of God, O all-glorious one,
to Whom you did give thyself, O all-honorable Alexander,
and you diligently pray with the angels.
Entreat on behalf of all who honor your memory a forgiveness of their sins.