Alexander (Golitzin) of Dallas, the South and the Bulgarian Diocese 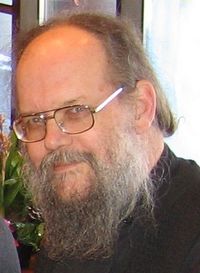 His Grace, the Right Reverend Alexander (secular name Alexander George Golitzin, Russian: Александр Юрьевич Голицын) is of bishop of Dallas, the South and the Bulgarian Diocese of the Orthodox Church in America.

A descendant of the Golitzin princely family, Alexander George Golitzin was born on May 27, 1948 in Burbank, California. He studied at the University of California at Berkeley, where he received the BA in English in 1970, before earning the M.Div. at St. Vladimir's Seminary in Crestwood, New York, in 1973. The future Bishop spent seven years in doctoral studies at Oxford University, where he earned the D.Phil. in Theology in 1980. His dissertation on Dionysius the Areopagite was written under the direction of Bishop Kallistos (Ware) of Diokleia. In the final years of his doctoral studies, he spent a year at Simonos Petras Monastery on Mount Athos, where he became a disciple of Elder Aimilianos. After his doctoral studies he returned to the United States, where he was ordained to the diaconate on January 23, 1982 and to the priesthood on February 26, 1984. Father Alexander received the monastic tonsure from Elder Aimilianos at Simonos Petras in 1986. He was later elevated to the rank of Igumen and, on the day of his election to the episcopate, to the rank of Archimandrite.