From OrthodoxWiki
Revision as of 00:43, December 22, 2010 by Frjohnwhiteford (talk | contribs) (Undo revision 96938 by Trueseek1 (Talk)It is ridiculous to call it heretical.)
(diff) ← Older revision | Latest revision (diff) | Newer revision → (diff)
Jump to: navigation, search
This article or section needs a cleanup to bring it to a higher standard of quality. Recommendation:
Needs a more balanced approach (much of the text assumes that this theory is universally held). Also needs a lot of style work.
More detailed comments may be noted on the talk page. You can help OrthodoxWiki by editing it, especially to conform to the Style Manual and the suggestions in How to write a great article. 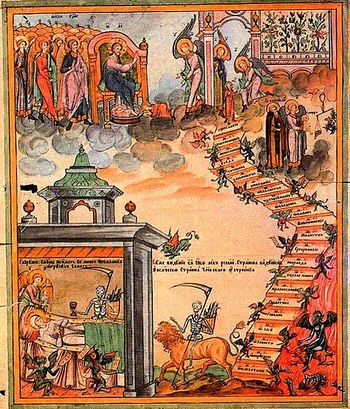 An Iconographic depiction of the Toll Houses
.

The teaching of Aerial Toll-Houses regards the soul's journey after its departure from the body, and is related to the particular judgment. In its most general form, it refers to the idea that after death, the demons attempt to find a basis for taking the soul to Hades, while the angels and the prayers of the living defend the soul if it can be defended. Whether the soul is finally seized by the demons, or taken to heaven depends on the state of the soul at death. In either case, the soul then experiences a foretaste of what it can expect after the final judgment. According to Fr. Thomas Hopko, the teaching of the Toll Houses is found in virtually every Father of the Church .[1]

In the life of St. Anthony the Great, he saw a vision of souls rising towards heaven and some being stopped by a large demon and cast down. Likewise St. Bede recorded certain visions of a Celtic Saint who saw a soul arising and fighting off demons with the help of angels and his reposed wife's soul.

"If we do not confess our involuntary sins as we should, we shall discover and ill-defined fear in ourselves at the hour of our death. We who love the Lord should pray that we may be without fear at that time; for if we are afraid then, we will not be able freely to pass by the rulers of the nether world. They will have as their advocate to plead against us the fear which our soul experiences because of its own wickedness. But the soul which rejoices in the love of God, at the hour of its departure, is lifted with the angels of peace above all the hosts of darkness. For it is given wings by spiritual love, since it ceaselessly carries within itself the love which 'is the fulfilling of the law' (Rom. 13:10)."[2]

In the Alphabetical Sayings of the Desert Fathers, Theophilus of Antioch (who reposed in 412 a.d.) we find:

"The same Abba Theophilus said, "What fear, what trembling, what uneasiness will there be for us when our soul is separated from the body. Then indeed the force and strength of the adverse powers come against us, the rulers of darkness, those who command the world of evil, the principalities, the powers, the spirits of evil. They accuse our souls as in a lawsuit, bringing before it all the sins it has committed, whether deliberately or through ignorance, from its youth until the time when it has been taken away. So they stand accusing it of all it has done. Furthermore, what anxiety do you suppose the soul will have at that hour, until sentence is pronounced and it gains its liberty. That is its hour of affliction, until it sees what will happen to it. On the other hand, the divine powers stand on the opposite side, and they present the good deeds of the soul. Consider the fear and trembling of the soul standing between them until in judgment it receives the sentence of the righteous judge. If it is judged worthy, the demons will receive their punishment, and it will be carried away by the angels. Then thereafter you will be without disquiet, or rather you will live according to that which is written: “Even as the habitation of those who rejoice is in you.” (Ps. 87.7) Then will the Scripture be fulfilled: “Sorrow and sighing shall flee away.” (Isaiah 35.10).
"Then your liberated soul will go on to that joy and ineffable glory in which it will be established. But if it is found to have lived carelessly, it will hear that terrible voice: "Take away the ungodly, that he may not see the glory of the Lord." (cf. Isaiah 26.10) Then the day of anger, the day of affliction, the day of darkness and shadow seizes upon it. Abandoned to outer darkness and condemned to everlasting fire it will be punished through the ages without end. Where then is the vanity of the world? Where is the vain-glory? Where is carnal life? Where is enjoyment? Where is imagination? Where is ease? Where is boasting? Riches? Nobility? Father, mother, brother? Who could take the soul out of its pains when it is burning in the fire, and remove it from bitter torments?" [3]

"But if souls have departed this life in faith and love, while nevertheless carrying away with themselves certain faults, whether small ones over which they have not repented at all, or great ones for which – even thought they have repented over them – they did not undertake to show fruits of repentance: such souls, we believe, must be cleansed from this kind of sin, but not by means of some purgatorial fire or a definite punishment in some place (for this, as we have said, has not been handed down to us). But some must be cleansed in they very departure from the body, thanks only to fear, as St. Gregory the Dialogist literally shows; while others must be cleansed after the departure from the body, either while remaining in the same earthly place, before they come to worship God and are honored with the lot of the blessed, or – if their sins were more serious and bind them, for a longer duration – they are kept in hell [i.e., Hades], but not in order to remain forever in fire and torment, but as it were in prison and confinement under guard." [4]

In both the Greek and Slavonic Euchologion, in the canon for the departure of the soul by St. Andrew , we find in Ode 7: "All holy angels of the Almighty God, have mercy upon me and save me from all the evil toll-houses."

In the Octoechos, there are many references to the Toll Houses:

"When my soul is about to be forcibly parted from my body's limbs, then stand by my side and scatter the counsels of my bodiless foes and smash the teeth of those who implacably seek to swallow me down, so that I may pass unhindered through the rulers of darkness who wait in the air, O Bride of God." Octoechos, Tone Two, Friday Vespers

"Pilot my wretched soul, pure Virgin, and have compassion on it, as it slides under a multitude of offences into the deep of destruction; and at the fearful hour of death snatch me from the accusing demons and from every punishment." Ode 6, Tone 1 Midnight Office for Sunday

In the Saturday Midnight Office, the prayer of St. Eustratius, contains the following:

"And now, O Master, let Thy hand shelter me and let Thy mercy descend upon me, for my soul is distracted and pained at its departure from this my wretched and filthy body, lest the evil design of the adversary overtake it and make it stumble into the darkness for the unknown and known sins amassed by me in this life. Be merciful unto me, O Master, and let not my soul see the dark countenances of the evil spirits, but let it be received by Thine Angels bright and shining. Glorify Thy holy name and by Thy might set me before Thy divine judgment seat. When I am being judged, suffer not that the hand of the prince of this world should take hold of me to throw me, a sinner, into the depths of hades, but stand by me and be unto me a savior and mediator..." [5]

The Number of the Toll Houses

The most detailed version of the toll-houses occurs in a vision of Gregory of Thrace, apparently from the 10th century. The demons accuse the soul at each toll-house of sins. In some cases the demon might accuse the soul of sins that they tempted her with, but it didn't comply with, or of sins that she repented for, and in that cases one of the angels, the one which was the persons guardian angel, speaks for the person, saying that those are lies, and that payment is not necessary, taking the soul to the next toll-house. If a person has unrepented sins, and does not have enough good deeds and prayers of the living to pay for them, the demons of the corresponding toll-house grab him, and take him to hades to await the final judgment. This vision recounts the toll-houses in the following order:

Many of the Orthodox who accept the doctrine of the toll-houses do not take the form or all the teachings from the vision of Gregory literally. Thus for example Fr. Thomas Hopko maintains that one should not try to associate a particular time after death to the process, nor should one take the toll-houses as being literally "in the air," or necessarily twenty in number. Likewise, he makes no mention in his argument for them of the doctrine of bargaining for sins (which is similar in some ways to the Latin doctrine of merits). Instead, his description, drawing on St. John Chrysostom and the Fifty Homilies of St. Macarius of Egypt, among others, takes the toll-house encounters to describe the attempt of the demons to assault the soul with its own vulnerability to sin, or to entice it away from God, and describes passing through the toll-houses as the purification of the soul.[6]. St. Theophan the Recluse likewise said that what the demons are seeking is "passions," and suggested that, although the toll-houses are often depicted as frightening, the demons might equally well try to entice the soul by appealing to one of its weaknesses. Some others go so far as to say that the demons and angels are metaphors for the sins and virtues of the soul. 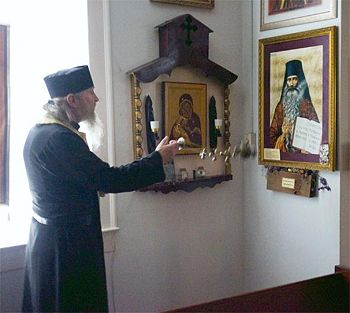 There is disagreement in certain circles regarding the status of this teaching within the Orthodox Church. Some, including Archbishop Lazar (Puhalo) of Ottawa, consider this teaching controversial, even false (describing it as gnostic or of pagan origin). The traditional proponents of the teaching argue that it appears in the hymnology of the Church,[7] [8] in stories of the lives of saints (for example, the Life of St. Anthony the Great, written by St. Athanasius the Great, the life of St. Basil the New, and St. Theodora), in the homilies of St. Cyril of Alexandria[9] in the Discourses of Abba Isaiah,[10] the Philokalia, the Ladder of Divine Ascent, and the Dogmatics of the Orthodox Church by Blessed Justin Popovich. Several contemporary Church figures speak about toll-houses.[11] [12] [13] [14] Secondly, not a single Church Father ever wrote even one sentence expressing doubt about this teaching (which is present in its most general form in the Church since at least fourth century), although their discussions of the topic are always about general struggles with "tax-collector" demons, lacking the details present in Gregory's vision (apart from one pseudo-Makarian story which also mentions numerous toll-houses and a bargaining over sins at each one). Thirdly, some of the greatest modern authorities of the Orthodox Church, such as St. Ignatius Brianchaninov[15] and St. Theophan the Recluse,[16] insisted not only on the truthfulness, but on the necessity of this teaching in the spiritual life of a Christian.