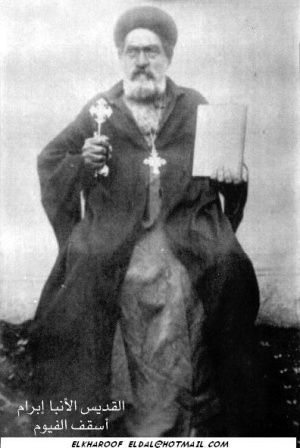 They sent him to the Church School. His teacher Raphael took care of him, taught him reading, writing, arithmetic, the Holy Scriptures and psalms, eccliastic hymns and psalmody. He was very intelligent and eager to learn everything.

(The late Anba Marcos, the bishop of Luxor, was ordained as a monk in 1870 at El-Meharrak Monastery and grew up under the the leadership of Fr. Paul. Pope Kyrillos V chose him in 1876 to teach the new monks at El-Baramous Monastery (see below). He met his spiritual father again after five years, and remained with him until 1879, when he was ordained as a Bishop for Luxor. Up till now the people still remember much about his pure life, his holiness, deep love for praying, his modesty, and his special care about everyone, and about renewing the old churches and constructing new ones.)

Coptic icon of St. Abraam
At the same time, Anba Isaac, metropolitan of the province of Fayoum and Giza, departed, then the four fathers asked the Pope to ordain their father as a bishop for that diocese. The Pope and the people of Fayoum became happy and joyful on that day for the ordination of their new bishop Anba Abraam, in 1881.

In 1964, the Holy Synod of Coptic Orthodox Bishops decided that his name could be added to the Saints mentioned in the Holy Mass, and many Coptic Orthodox churches around the world today are named after him.