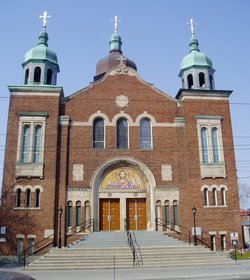 The majority of the first Ukrainian immigrants to Canada were Eastern Rite believers, with only a small fraction belonging to the Eastern Orthodox faith. This changed with later waves of immigration that saw more people coming from the Orthodox east. The first Ukrainian Orthodox Divine Liturgy in Toronto was celebrated in 1926.1 For several years the church members met in rented halls and in churches of other denominations. The land on Bathurst was purchased in 1935, work on the church building began in 1946, and it was completed two years later. St. Volodymyr's became a cathedral in 1951 with the coming of its first bishop.

St. Volodymyr's architecture is in the standard Byzantine style used throughout Ukraine.

The bishops who have had their cathedral seat in Toronto include: