Icon of the Mother of God “The Word Made Flesh” 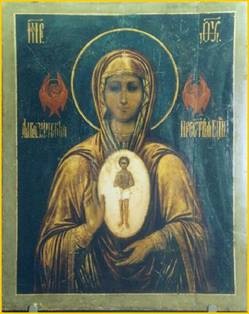 Icon of the Mother of God “The Word Made Flesh

The Icon of the Mother of God “The Word Made Flesh", also known as the Albazinsk Icon, is a wonderworking icon associated with the Russian settlement of Albazin on the Amur River of central Siberia. The icon is commemorated on March 9.

In the seventeenth century, the fertile area along the Amur River to the north of China was a point of contention between Russian frontiersmen and cossacks and the Chinese of the Manchu empire. The Russians had built a frontier town and fort called Albazin on the Amur River. In 1665, a priest, the Elder Hermogenes, brought an icon of the Mother of God “The Word Made Flesh” to Albazin from the Holy Trinity Monastery of Kirensk. The icon became popularly known as the Albazinsk Icon.

A few years later the Elder moved the Albazinsk Icon to a small monastery he had established a short distance from Albazin. As the area prospered the icon became associated with the defense and prosperity of Albazin and the surrounding area. Two churches, the Ascension of the Lord and St. Nicholas the Wonderworker, were built in the town, as well as the Spassky Monastery. Missionary efforts among the Daurian and Tungusian peoples of the area brought many of them to Christ, including the conversion of the Daurian prince Hantimur and Katana his son.

The expansion of the Russian presence in the area disturbed the Chinese who finally mounted an attack, in 1685, that destroyed Albazin and forced its abandonment. The preservation of the grain fields in the area, that the Chinese emperor ordered destroyed, was attributed to the Albazinsk Icon which thus fed the survivors of Albazin through the next winter. Over the next several years, the Chinese mounted repeated attacks to force abandonment of Albazin. Finally, in 1690, the cossacks under Basil Smirenikov leveled the fortifications and departed with all the holy things including the Albazinsk Icon that was taken to Sretensk on the Shilka River, a tributary of the Amur.

The Protection of the Mother of God came forward again during the Yihetuan Movement (Boxer) Rebellion of 1900, when Chinese forces descended onto the river bank across from Blagoneschenk, threatening to cross the shallow waters of the Amur River in an invasion of the Russian city. The enemy fired artillery on the undefended city, while in the Church of the Annunciation services were celebrated continuously and Akathists were read before the Albazinsk Icon of the Mother of God. After nineteen days, the Chinese departed from Blagoneschenk, leaving accounts that they often saw a Radiant Woman over the banks of the Amur River that inspired them with fear and rendered their missiles ineffective.

The Wonderworking Albazinsk Icon of the Mother of God has watched over the Amur River frontier for over 300 years and has been venerated as the Protectress of soldiers and mothers. Believers pray before the icon for mothers during their pregnancies and childbirth.

The Albazinsk Icon shows a figure of Christ as a child standing in a mandorla before his mother’s breast.