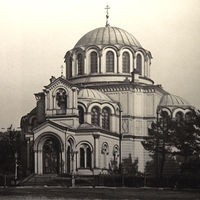 The Greek Church of St. Demetrius of Thessalonika in St. Petersburg, Russia was commissioned by entrepreneur D. I. Benardaki for the needs of the Greek community of St. Petersburg, and was located at 6 Ligovsky Avenue.

It was constructed from 1861-65 in the Byzantine Revival architectural style. The architect was Roman I. Kuzmin. The iconostasis, icons and the church chandelier were done in Greece; the paintings were performed by P. M. Shamshin and K. L. Bramson. The church with three side-chapels, a large lantern dome drum and a bell tower could hold 1,000 people.

The burial-vault of the Benardaki family was located in the crypt. The church was subordinated to the Greek Embassy, priests from Greece served in the church, and services were held in Greek and Slavonic.

In the summer of 1938 the Greek Church of St. Demetrius of Thessalonica was closed down and in 1962 it was destroyed. The Oktyabrsky Concert Hall was built in its place.