From OrthodoxWiki
(Redirected from George (Vladimirou) of Accra)
Jump to: navigation, search 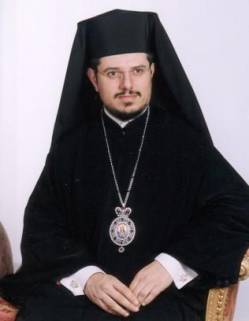 His Eminence George of Guinea

His Eminence, the Most Reverend George (Vladimirou), is the Archbishop of Guinea and Exarch of the African Coast (Guinea, Sierra Leone, Liberia, Guinea Bissau, Gambia, Senegal and Cape Verde), part of the Church of Alexandria. His Eminence is credited with the establishment of the sees of Mozambique and Botswana, and the elevation of Zambia to Archdiocese. His Eminence’s names day is April 23.

George Vladimirou was born on March 27, 1966 in Limassol, Cyprus. He graduated as a “Leader” from the Anargyrios and Korgialenios School in Spetses at which he attended under a scholarship. He continued his education at the University of Thessalonica where he studied law. Beginning in 1989, he studied Business Management at the Thames Valley University of London. From London he returned to Greece and entered the University of Athens to study Theology.

George worked also as a teacher at the Greek School of the Virgin Mary in Camberwell Green during his four years in London. During the period of 1993 to 1997, while studying Theology, he worked in the private sector in Athens and performed voluntary missionary work at centers in Madagascar and India, the later under the Metropolis of New Zealand, which had jurisdiction over India and Hong Kong also. In 1996, George was invited to the establishment of the Metropolis of Hong Kong.

On June 30, 1998, George entered the clergy as he was ordained deacon. Then, on July 5, 1998, he was ordained priest by His Eminence Nikitas (Lulias) of Hong Kong (1996–2007), current Archbishop of Thyateira. On October 18 of the same year, he was elevated to the dignity of Archimandrite.

With his ordination, Archimandrite George was named Protosyngellos of the Cathedral of Saint Luke and all the Metropolis. During his time in Hong Kong, he began a local Orthodox magazine, “The Censer” and taught at the Metropolitan Saint Makrina Greek School. He also taught on the subject of Orthodox Faith to inquirers.

On February 22, 2001, at the request of Patriarch Petros, Archimandrite George was elected titular Bishop of Nilopolis by the Holy Synod of the Church of Alexandria. On March 4, 2001, the Sunday of Orthodoxy, he was consecrated by the Patriarch in the Church of the Annunciation in Alexandria, Egypt. At the same time he was appointed the Patriarchal Vicar of Alexandria, keeping his position as Patriarchal representative to the international community.

After the fatal helicopter crash that culminated on Patriarch Petros' repose in 2004, the Holy Synod elected His Beatitude Theodoros (Choreftakis) of Zimbabwe to become Patriarch of Alexandria. Two weeks later, on October 27, 2004, Bishop George was elected by the Holy Synod Archbishop of Zimbabwe and enthroned on December 19, 2004.

Archbishop George worked closely with the Southern African Mission, bringing more priests and developing Orthodox communities in the countries of Zimbabwe, Malawi, Mozambique, Angola and Botswana. With the help of Patriarch Theodoros, His Eminence submitted to the Holy Synod a request to establish the Diocese of Mozambique, which was accepted on November 1, 2006. In 2009, His Eminence decided that it was meet to transfer the missionary efforts in Malawi to the Diocese of Zambia. On October 6, the Holy Synod approved the transfer and elevated Zambia to the status of Archdiocese.

In October 2010, a rearrangement of diocesan responsibilities was made within the Patriarchate of Alexandria to accommodate additional duties for His Eminence Seraphim (Kykkotis), who at the time served as Archbishop of Johannesburg, as Patriarchal representative. Based on the missionary reports of Southern Africa, Patriarch Theodoros decided that the missionary workforce of the region would now be concentrated in Botswana instead of Zimbabwe and Angola.

On October 7, 2010, Archbishop George was made Archbishop of Accra and Exarch of West Africa (Ghana, Ivory Coast, Mali, Burkina Faso), while the other countries of Sierra Leone, Guinea, Liberia, Guinea Bissau, Gambia, Senegal and Cape Verde, gained their own see, the Diocese of Sierra Leone on the same day. No longer a missionary, His Eminence was sent to Athens, where he lives up to this day as representative of His Beatitude Theodoros to the Church of Greece, from which many missionary priests come to Africa.

At the November 21, 2012 Fall meeting of the Holy Synod of the Church of Alexandria Patriarch Theodoros decided to revive the West African Mission. The Diocese of Sierra Leone was elevated to and renamed as Archdiocese of Guinea (now independent of Accra) to receive George as Archbishop, while Bishop Savvas (Heimonetos) of Burundi was made Archbishop of Accra (2012–2015). At the same meeting Archbishop George was enthroned Archbishop of Guinea.