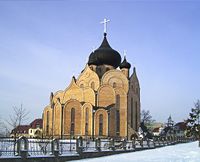 The Church of the Holy Spirit in Białystok, Poland

The first attempts to build a church in Białystok began in 1970. It took until 1982 to obtain the approval of the government authorities to begin construction. Construction began in June 1982 with the excavation for its foundation. On August 1, 1982 the cornerstone was blessed by His Grace Bishop Sawa, then, of Białystok, who had initiated the construction project. Construction of building progressed slowly, with completion occurring in 1999. The consecrated on May 19, 1999 by, now, His Eminence Sawa, Metropolitan of Warsaw and All Poland, assisted by His Graces Jacob, Bishop of Białystok and Gdansk, Abel, Bishop of Lublin, Gregory of Bielsk, and Artemius, Bishop of Grodno.

The architect was Jan Kabac. The building has five domes, one central and four smaller ones. Its shape imitates fire descending from Heaven. The decoration of the interior is not yet completed. However, there are already frescoes of Old and New Testament saints on the walls. The church has two altars and the tallest iconostasis in Poland.

In June 2006, construction of the belltower was initiated. It is planned to contain ten bells made by artisans from Archangel, Russia.