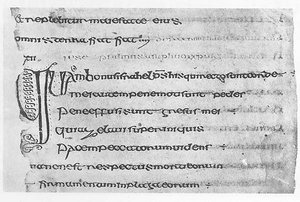 Text from the Cathach of St. Columba

The Cathach of St. Columba is a sixth or seventh century Irish Psalter using the Latin text of the Vulgate.

It is traditionally associated with St. Columba of Iona (d. 597), and was identified as the copy clandestinely made by him of a Psalter loaned to him by St. Finnian of Moville. Being the first recorded case of copyright infringement in history, the resultant dispute led to the Battle of Cul Dremhe in 561. (Contrary to traditional accounts, paleographic studies suggest a later date for the manuscript, the early seventh century.)

The Cathach was enclosed in a shrine in the eleventh century by Cathbar O'Donnell, head of the O'Donnell Clan, and Domnall McGroarty, Abbot of Kells. The shrine was carried into battle by the McGroarty as a talisman (hence the name: Cathach means "Battler"). The manuscript was rediscovered in 1813, when the shrine was opened. The Cathach was entrusted to the Royal Irish Academy in 1842 by Sir Richard O'Donnell. The O'Donnell family always claimed ownership of the Cathach, but the manuscript had remained in the custody of the McGroartys its official keepers.

Today, the manuscript is in the Royal Irish Academy in Dublin, while its shrine is in the National Museum of Ireland, also in Dublin.

There are 58 folios in the damaged and incomplete manuscript. The maximum size is 200 by 130 mm. The extant portions include Psalms 30:10 to 105:13, and Irish Gaelic rubrics appear above the Psalm texts. It is thus both the oldest known Irish manuscript and contains the earliest examples of old Irish Gaelic in writing.

The decoration of the Cathach is limited to the initial letter of each Psalm. Each initial is in black ink and is larger than the main text. They are decorated with trumpet, spiral and guilloch patterns and are often outlined with orange dots. These patterns are not merely appended to the letters or used to fill spaces. They instead distort the shape of the letters themselves. The letters following the enlarged initials gradually reduce in size until they reach the same size as the main text. Although the motifs of the Cathach decoration are not similar to decorations in later manuscripts, such as the Book of Durrow (which followed the Cathach by as many as seventy years), the ideas of decoration which distorts the shape of the letters and the diminution of initial letters are ideas which are worked out in great detail in later Insular art.